During my first year of university my friend Cory and I began to plan a cycling trip across Canada. I don’t exactly remember where the idea came from, but it quickly developed from a dream to something that could actually happen. We decided to raise money for the B.C. Cancer Foundation, as both of our families have been effected by cancer. We raised over $15,000 from friends, families, and local businesses. The experiences of fundraising, and the completion of the actual cycling trip have been two of the most rewarding experiences of my life.

You can also find a longer video here, but YouTube deleted all of the audio. 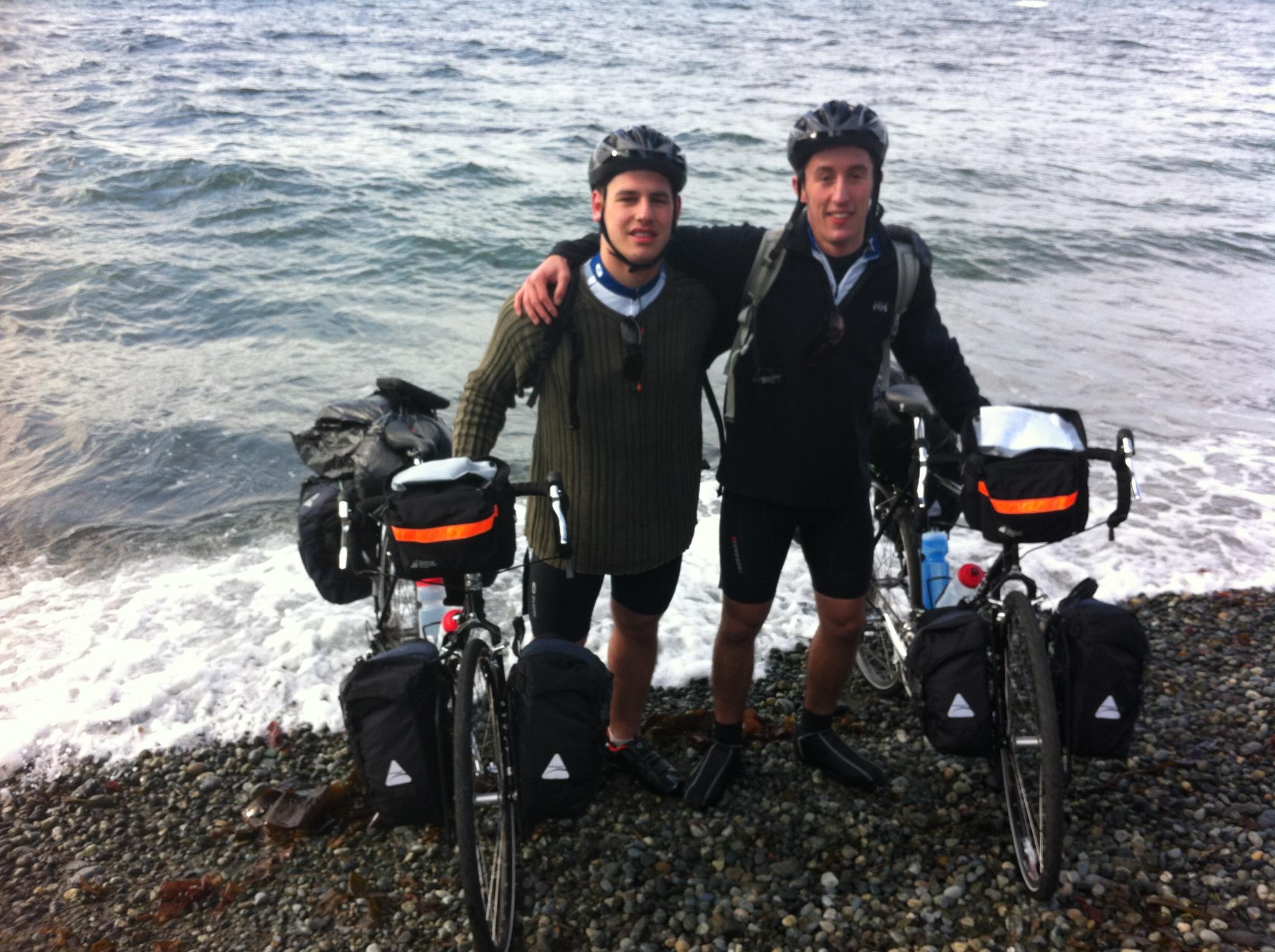 The trip itself took 48 days (including 3 rest days), and we covered over 6,500km. We started in Victoria B.C. (dipping our tires into the Pacific Ocean) and finished in Halifax Nova Scotia. Everyday brought a new challenge, but our friends and family supporting us back home, and the people we met along the way pushed us to keep going. Looking back Cory and I were both unprepared at the start of the trip. Throughout the Western mountain ranges we both experienced physical pain. It was also a learning experience figuring out would and wouldn’t work in terms of camping. Although extremely challenging, the mountains also presented many rewards such as breath taking scenery, extreme speeds, fresh air, kind people and new experiences. 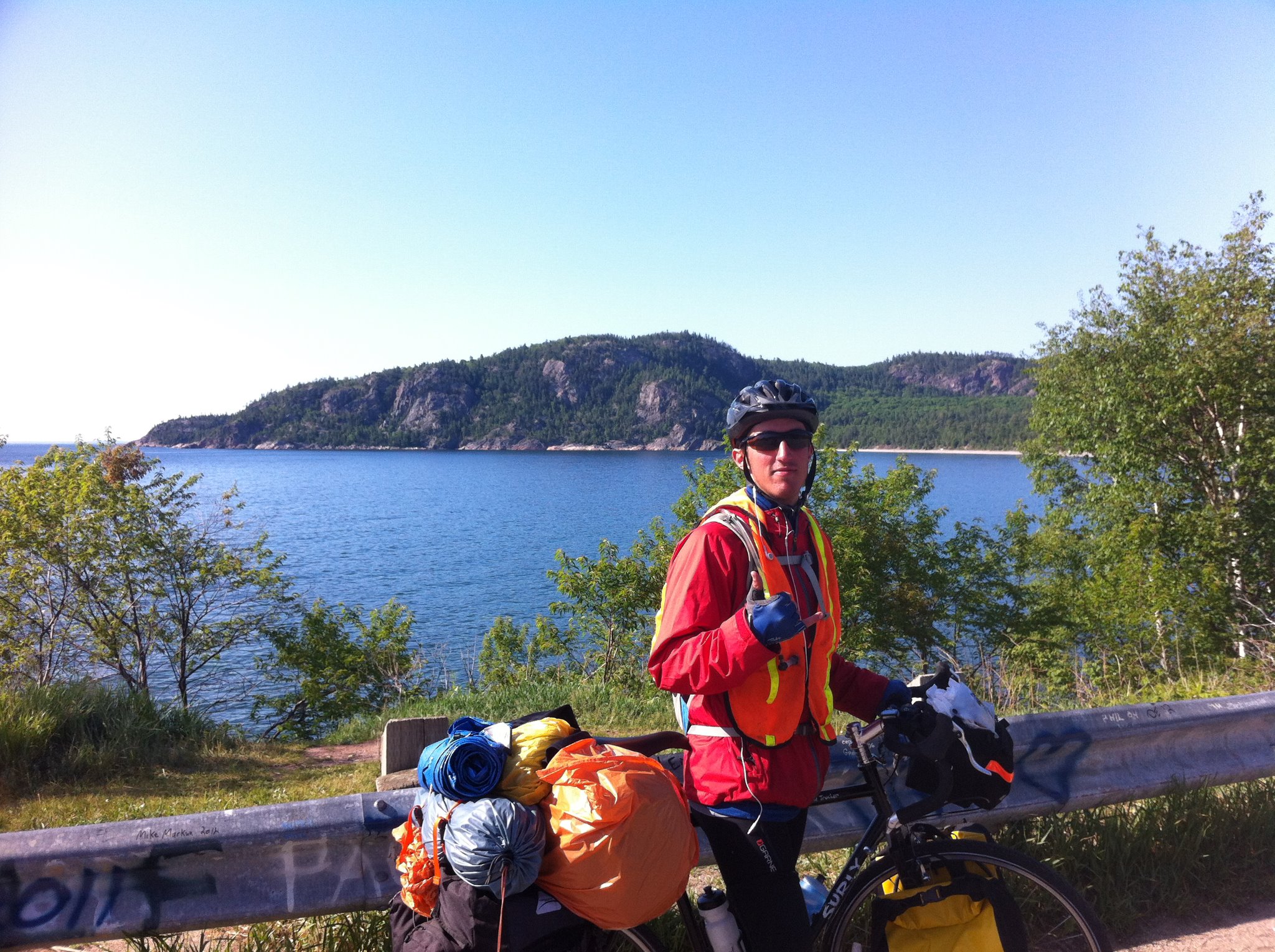 When we arrived in the prairies I was pleased to discover they were not as boring as most people may think. Although extremely flat, we saw lots of wildlife, and had some amazing experiences. If you ever end up in Piapot Saskatchewan make sure to go to the Piapot Saloon and ask for Glen. We had one of our most memorable nights. It involved shotguns, pickup trucks, and great hospitality. 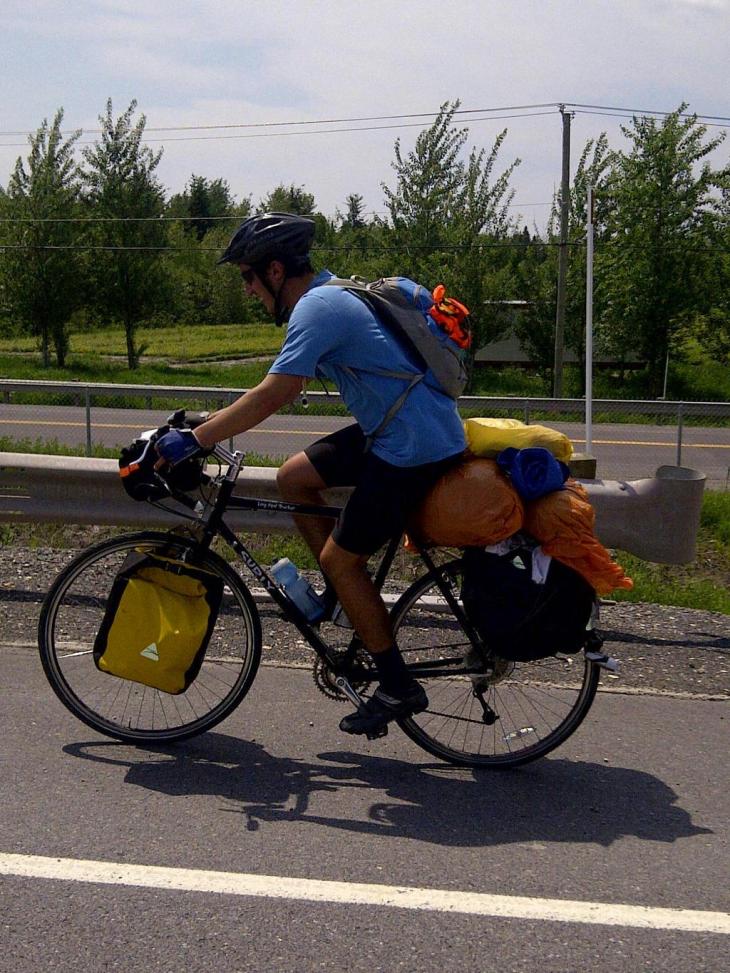 Ontario turned out to be much harder than I had imagined. Not only did it rain almost everyday, but the hills/mountains out there are way bigger than I knew. It took forever to cross Ontario and I was happy when we were done with it. The roads were very dangerous and had small shoulders. On the positive side there was lots of great scenery, wildlife, and like every other part of Canada great people to be met along the way. 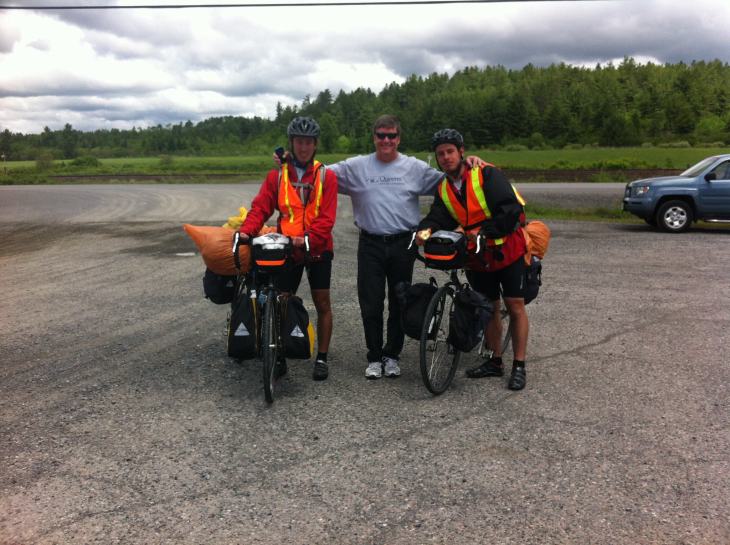 Quebec and the Maritimes provided safer riding, and the amazing feeling of the finish being attainable. Quebec in particular was very bike friendly, and there were lots of great side roads to be found. The Maritimes were fun to ride through, and it was my first time in this part of Canada. We also made great time through here.The riding was very hard due to our sore bodies, but we really pushed ourselves the last couple weeks. Near the very end I found it easier to push myself with the self knowledge that I knew I could make it. 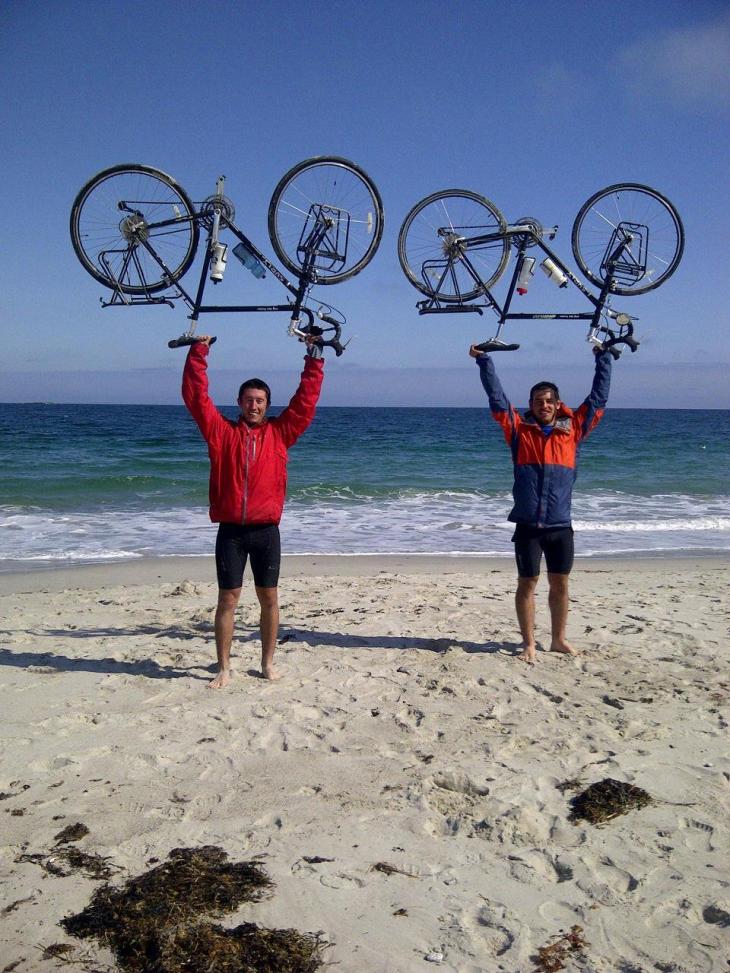 After 47 days of cycling we arrived to the outskirts of Halifax late at night and crashed at Cory’s father’s house in Waverly. At this point it felt like we had finally accomplished our goal. We were able to sleep in, and the next morning set out on a short ride to Crystal Crescent Beach where we decided we would finish. Cory’s cousin joined us for the final day, and a small welcome party awaited us on the beach. Several km out we grabbed a bottle of Champagne to pop, and minutes later we dipped our tires into the Atlantic ocean, signifying the completion of our coast to coast journey. After 48 days of soar muscles, sunshine, rain, speed, headwinds and tailwinds it felt surreal that it was over. It took my body several days to realize that it could finally rest, and I felt very tired and weak for several days after the trip. If you have the time and funds to make this trip happen it is 100% worth it. You will be tested in every way, and it is not easy, but nothing worth doing is. Go out there, explore, and try it for yourself.

We both rode this bike and had different experiences. I like mine and had no problems with it.  Although slightly heavy it did seem to be durable.  Just make sure to change your tires halfway through the trip to avoid flats. 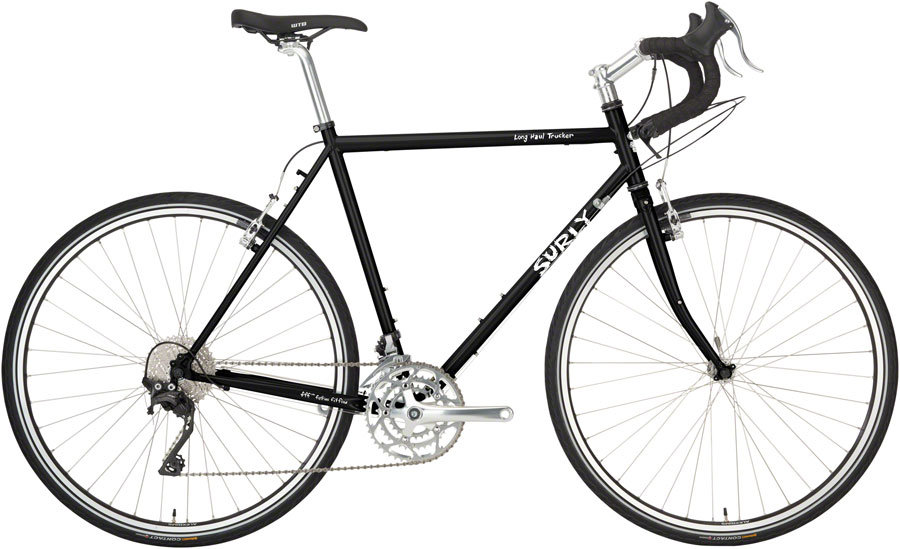 These rear panniers worked pretty well.  Although not at all waterproof they can hold lots and I really liked the accessible pockets on the back and front.  They were also pretty durable and held strong for the trip. 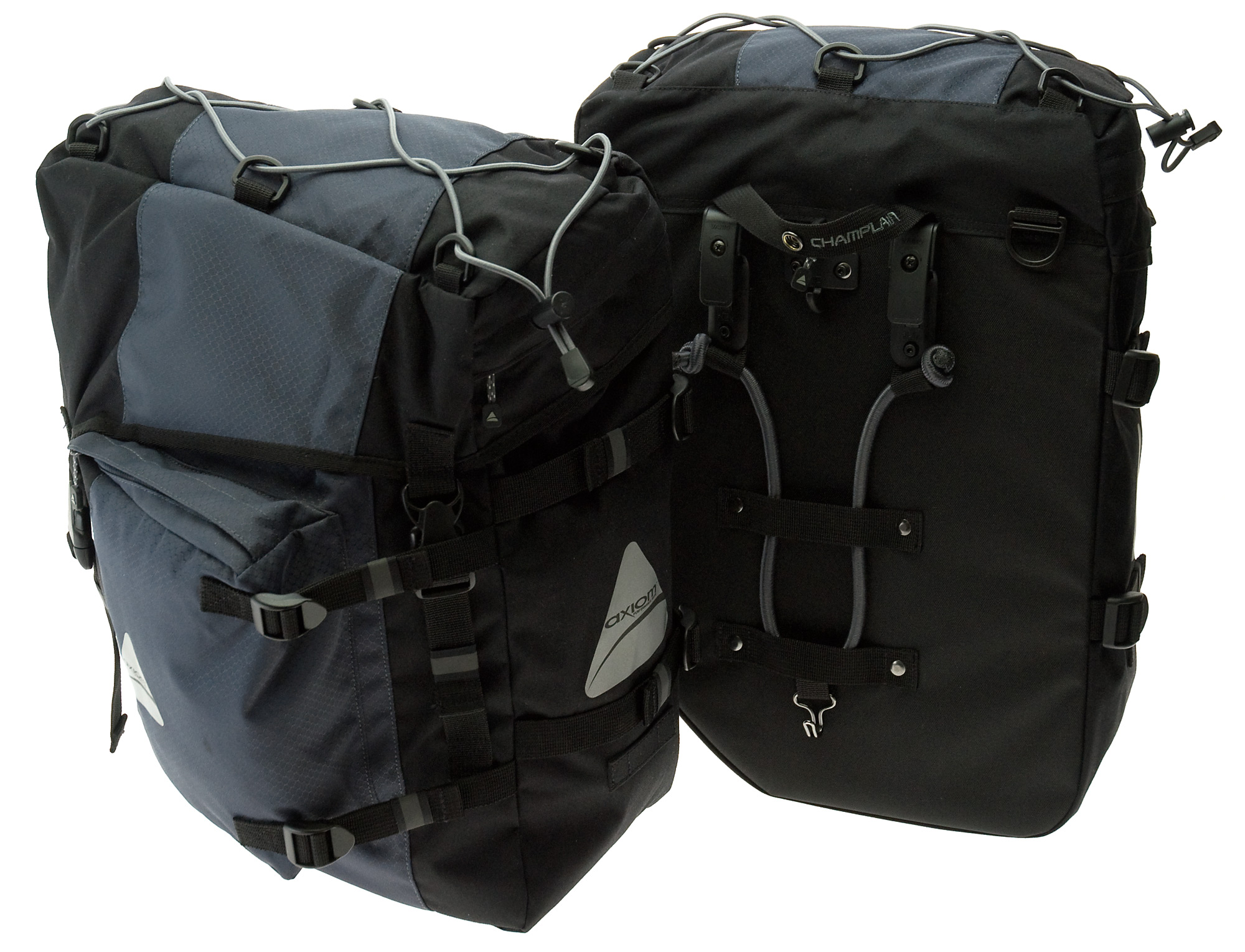 I got these in Thunder Bay after days of rain.  They are very waterproof and I liked them a lot.  Although heavier they are easy to quickly open and shut.  Most importantly these will keep your things bone dry. 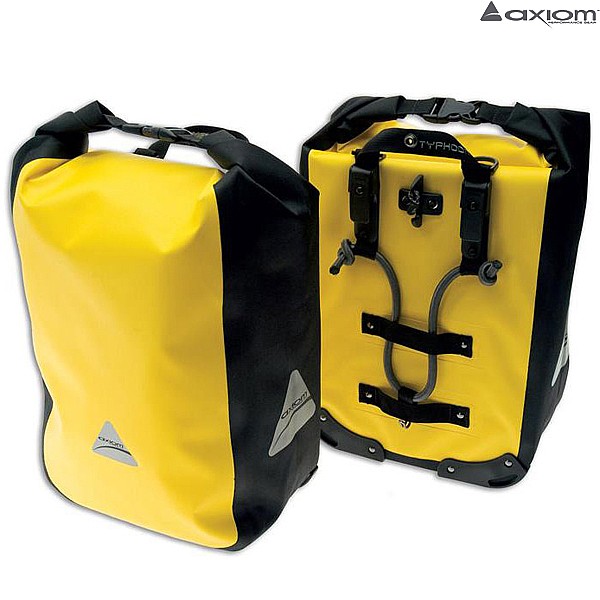 Overall our gear worked out pretty well.  We had just about over 50 pounds which was manageable but at times felt pretty heavy.  If your not sure if you need it... Don't bring it!  We were lucky to ride a few days without our gear because we had family or friends come visit us and take the gear for us.  With the weight off biking is way easier, and you will go way faster especially up hill.  The most important things I would highlight are get at least 1 waterproof bag, get a camel back and drink as much water as possible, get a durable bike, good rain gear is very nice to have when you get stuck in the rain for days, make sure your tent is super easy to assemble (its hard when your so tired after riding all day), and the solar panel from Voltaic was really nice to have to always have power.