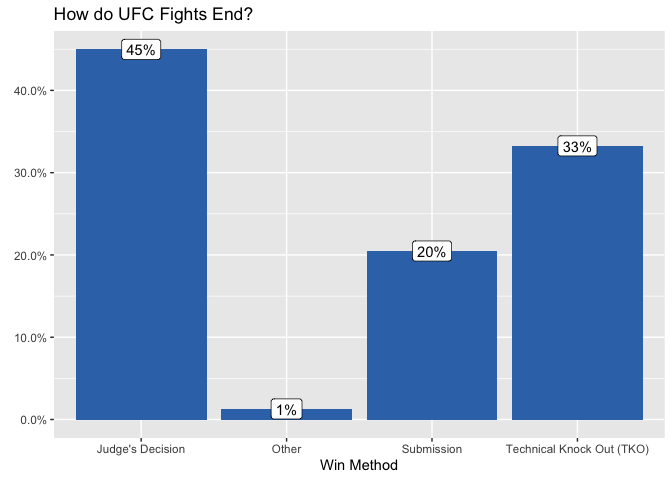 Given that the outcome of so many fights are determined by the judges their ability to fairly score a fight is an important part of the sport. One win or loss can make or break a fighter’s career. But judging is tricky business. It is frequently the subject of public scrutiny:

How can we assess if judging in the UFC is fair? Are the judges really selecting the better performing fighter? Are they correctly applying the UFC rules to select the winner?

To answer this question we must first understand what the rules are. How are the judges supposed to pick a winner? Then we can use statistical tools to compare what the judges are actually scoring compared to what they should be scoring.

What are the rules?​

The system is confusing, but here are the basics. Judges score each round on a “10-Point Must System”. The official MMA rules describe scoring as follows:

“Effective Striking/Grappling shall be considered the first priority of round assessments. Effective Aggressiveness is a ‘Plan B’ and should not be considered unless the judge does not see ANY advantage in the Effective Striking/Grappling realm. Cage/Ring Control (‘Plan C’) should only be needed when ALL other criteria are 100% even for both competitors. This will be an extremely rare occurrence.”

What are the judges scoring?​

We can never know what was going on in a judges head. But by using the data from every UFC fight, we can identify which features are strongly correlated with winning or losing.

For example, based on my reading of the rules effective striking should be very important criteria for a judge in selecting the winner. Although there is no perfect way to report effective striking as a single number, the number of strikes landed is probably a good proxy.

The data collected has several features including:

Below is an example of the data:

If the model is to work, we would expect to see that more strikes, take-downs, submissions, and passes is correlated with winning. For each feature, we can plot the relationship to visually compare.

The box plots show the median (the purple line), and the 25th and 75th percentile (the left and right hand side of the box). Each dot represents the outcome of a fight for each fighter. 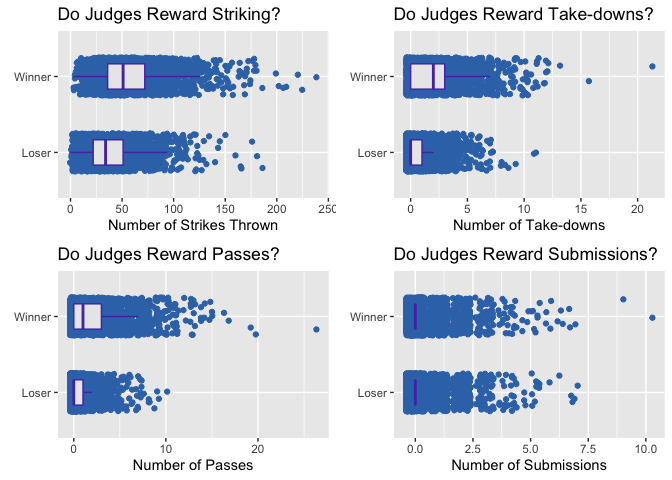 For striking, take downs, and passes it appears that at least visually the better performing fighter usually wins. The relationship between submissions and winning is not as clear.

To better understand the relationship between a fighters performance and the judges decision we can fit a logistic regression model to the data. The model will tell us which features in the data are the strongest predictor of the outcome. In this case, we have set the outcome to whether the blue fighter wins or losses. The first model will only use the features that the judges should consider: striking, take-downs, passes, and submissions.

The table above can help us finally answer the question “is UFC judging fair?”. The results of the logistic regression reveal that:

We can think of the results of the logistic regression as a proxy for what judges actually care about. Further we can test the model to see how well it generalizes to the actual data.

When I fit the model above I used a random sample of 80% of the fights. We can test how well the model generalizes to the remaining 20% of the data by generating predictions. A high prediction accuracy would suggest fair judging. Or at least judging that is applied consistently.

To test this theory we can fit the same model as before, but this time add three additional features: weight, height, and reach. If the judges are being fair, theses features should not effect the outcome of the fight.

Interestingly, the three “unfair” features are all considered the least important. They have a small coefficient, and a high p-value suggesting that these variables are not good predictors. This can give us some comfort that the judges are actually only considering fighter performance.

So is the UFC fair?

The analysis above is an attempt to answer the question, but I think the results are far from conclusive:

But I do not know if 85.32% consistency is good enough. Is it poor judging, or something that cannot be observed in the data we have? Hopefully further analysis and the collection of additional data can help better answer this question.